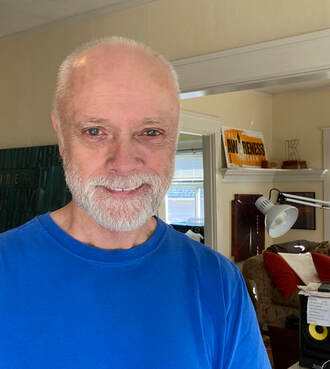 Details
Patrick was born in Portland, OR, in 1951 and has been living in Seattle, WA since 1981. He is an artist, author and educator.

2015
"Who Are You?" group show: at Center on Contemporary Art, Seattle WA

1982
University of Vancouver, BC, Exhibition Hall

1974
​One Person show at Cannon Beach Art Gallery, OR

1975
Received a grant from the Oregon Arts commission for the creation and installation of a public sculpture. At that time he was working in steel and concrete.

1973- 1974
Patrick graduated with a BFA and received two half-year fellowships at Pacific Northwest College of Art, in Portland, OR

Writing
Patrick writes articles and essays on the topic of art and the evolution of human consciousness.

2013
Patrick Howe's art theory book “The Awakening Artist: Madness and Spiritual Awakening in Art” was published by John hunt Publishing. The book was nominated in 2014 for the Robert Motherwell Book Award for outstanding and original thinking on the topic of Modernism in Art.

​
Education
Graduated with BFA from Pacific Northwest College of Art, Portland, OR, 1974

1990
Selected works were published by The Winn Corporation.

1979
Lectured at Colorado State University, CO on the topic of art and the evolution of human
consciousness.

​1975 - 1977
Patrick was the Head Preparator working with curators at the Portland Art Museum, in Portland, Oregon.

Patrick currently teaches with Path with Art, in Seattle, which is an arts organization that transforms the lives of people recovering from homelessness, addiction, and other trauma by harnessing the power of creative engagement as a bridge to community and a path to stability.

2004-2014
Patrick taught adult oil painting classes and workshops at Patrick Howe Gallery, in Seattle. The gallery was closed in 2014 due to gentrification.

1970-1975
​Patrick taught in The Children’s Art Program at the Portland Art Museum.

Teaching Style
Patrick Howe’s teaching style is a balance of structured lessons and individual freedom of expression. The beginners learn the foundational principles of realism and explores aspects of technique, color, value, composition and a full range of painting mediums. With that foundation in place, the more advance students are shown how to bring their own sensibility into their artwork, thereby making it unique and original. And for those students inclined toward abstraction, they are taught how to translate their foundational skills into abstract works.

Patrick offers demonstrations in his classes and provides technical information in the form of handouts or blog links sent to students. Sometimes he shows slide shows of other artist's work, or of aspects of art history that pertain to the lesson at hand. He also tailors the teaching to suit each students level and abilities. In his classes, all questions are welcomed and he encourages a nonjudgmental and supportive classroom environment.
Patrick Howe
Bio
Patrick Howe was born into a family of nine children in Portland, OR, in 1951. He showed promise as an artist early on with an obsession for drawing. He got his first set of oil paints at eight years old when walking past a frame shop with his father. Patrick begged his father to go into the frame shop to look at a reproduction of Van Gogh’s “Wheatfield With Crows” that was visible through thee window. Patrick stared at it in wonder. Next to the print was a set of oil paints and brushes and immediately Patrick new they were meant for him. The floor of his bedroom became his studio. Patrick went on to receive awards in high school for outstanding achievements in art, mechanical drafting and architecture. Part of his high school schedule was to spend some days at a professional architecture firm doing manual mechanical drafting and to learn more about architecture.

When he was 15 years old, Patrick had his first one person art exhibition in the lobby of US Bank, in Portland, OR. In the show he displayed portraits, square-rigger sailing ships and imaginative abstracts. The show was reviewed favorably in the Oregonian by columnist Doug Baker. In 1970 Patrick entered Pacific Northwest College of Art, where he received two fellowships. During this time Patrick also developed an interest is philosophy, theology, eastern religion, and psychology, which remain themes that he continues to work with in his artwork today.

After graduating from Pacific Northwest College of Art, in 1974 , Patrick became the Head Preparator at the Portland Art Museum, which involved installing exhibitions in over twenty galleries and gave him an intimate knowledge of many of the worlds most famous works of art. In 1975 he completed an sculpture project for the Oregon Arts Commission. In 1976 he moved to Colorado and continued painting. In 1980 he was selected by the Colorado Council on the Arts and Humanities (CCAH) to conduct workshops and classes throughout the State. He was also selected to be a member of the CCAH Chautauqua Tour which included 40 artists of every discipline (musicians from the Denver Symphony Orchestra, actors from the Denver Theatre, dancers from the Denver Opera) and he was the only painter that year to be chosen out of thousands of visual artist applicants. He also lectured on the topic of art and the evolution of human consciousness at Colorado State University.

​Patrick has exhibited his work in many galleries and has participated in two juried exhibitions at the Portland Art Museum, and had a one person show at the Loveland Art Museum, in Colorado. Patrick was also an award winning graphic designer, and produced branding, logos, calligraphy, and illustrations for many Fortune 500 companies. In 2004 he opened Patrick Howe Gallery, in Seattle, where he showed his artwork and held painting classes. In 2014 the gallery was closed due to gentrification. During his time at the gallery he wrote “The Awakening Artist: Madness and Spiritual Awakening in Art.” The book was nominated for the Robert Motherwell Book Award in 2014 for outstanding and original thinking on the topic of Modernism in Art. The book was written for students of art and reflects Patrick’s life-long interest in philosophy, eastern spirituality, psychology and art history. After the close of Patrick Howe Gallery, in 2014, Patrick has dedicated a large part of his time to the development of his Post Personalism series. Today he lives and works in Tangletown, in Seattle, WA.
Copyright © 2017, by Patrick Howe, all rights reserved.
Patrick Howe, Artist, Author and Educator
Seattle, WA
Email patrick@patrickhowe.com
Studio: 206-322-5540,